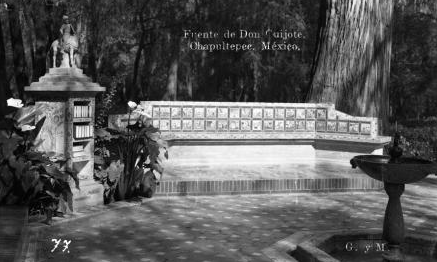 “This fountain tells the adventures of the knight-errand and his faithful squire and servant Sancho Panza.”

Around 1920 this small, beautiful square was already one of Mexico city’s favorite cultural spaces. The exact year in which it was built is unknown, but we do know that in the 1920’s this landmark was inside the Catalogue for Sculptural and Memorial Monuments of the Federal District.

In the same decade, the images of this park were part of the city’s daily life recorded in many photos that today give testimony of the popularity and love for this space.

Four concrete benches, tiles that narrate and illustrate passages from Don Quijote, and two columns created by the sculptor Alessio Robles, from Sevilla, are topped by the figures of Don Quijote and Sancho Panza.

But no one expected that vandalism and theft of these sculptures in 1974 will permit that Mexico city, besides having a corner full of poetry and suitable for reading will become the home of one of the most surrealistic fountains in the world, thanks to the artist José María Fernández Urbina, one of the most prestigious Mexican sculptors of the XX century. This artist gave the fountain one most extraordinary feature: the Quijote bearing the face of Dalí while Sancho Panza, the loyal squire, bears that of the famous muralist Diego Rivera.

Another important attribute added to this enchanting place is that visitors could borrow books from the bookshelves located inside each column and under each sculpture and also from a little cellar, which people affectionately knew as El Quijote’s library located a few steps from the fountain.

You can see in this historical picture the proud and upright books inside of one of the columns. This image dates from the 1930s.

Today the most surreal characters of the forest want to return

We want to restore this space, therefore since 29th September (the birthdate of El Quijote’s creator Don Miguel de Cervantes Saavedra), we launch a campaign to have again this reading spot and to open it to visitors as well. And you can help! knowing more about this project and donating ‘here’