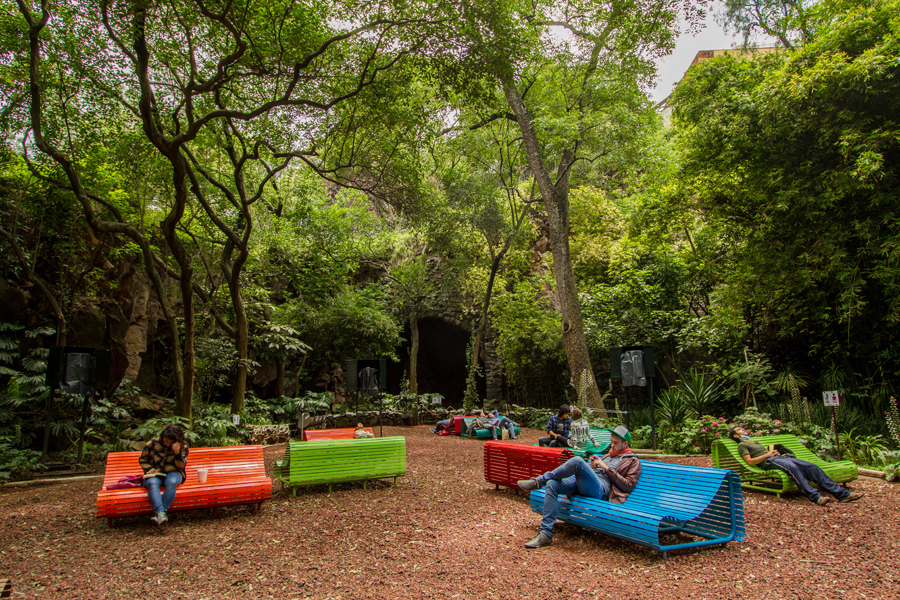 In Mexico City’s magic garden, there is only one rule: No talking

Six years ago, Hector Sampson was taking his daily walk in Mexico City’s Chapultepec park when he heard a trace of classical music drifting from the trees. He followed the sound, down a dense corridor of shrubs and bushes, until he found himself in a verdant, sonic paradise.

Lush foliage surrounded brightly colored benches — blue, red, orange, yellow — on which people peacefully reclined while listening to music that played from a ring of speakers. Sampson had discovered one of the city’s best-kept secrets: the Audiorama. 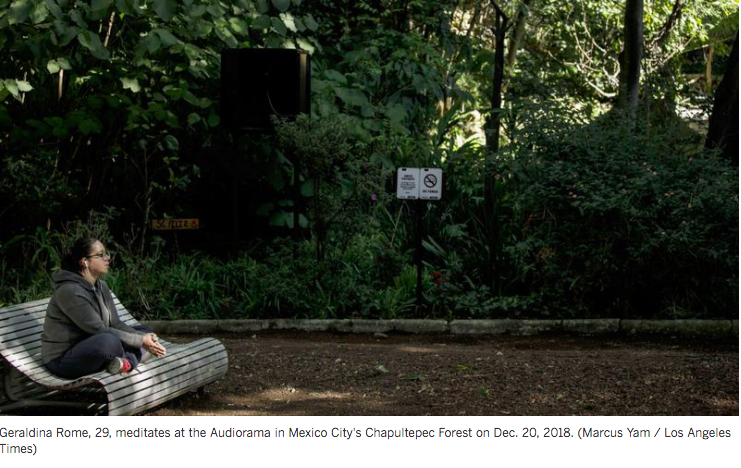 Far removed from the crowds and chaos that dominate the rest of Mexico’s expansive capital city, the Audiorama offers a rare refuge for reflection. For decades, people have been coming to the free, city-run space to detach for a moment from the rest of the world — to meditate, pray, read, sit quietly with lovers, even grieve. There’s just one rule, spelled out on several small signs: “No talking.”Another small, hand-lettered sign reads “Be happy.”

“It’s an oasis,” said Sampson, a writer and radio personality whose esoteric interests include quantum physics and research into alien life. Since coming across the Audiorama, he has visited daily and has helped organize a rotating library of books — mostly poetry, plays and historical tomes — from which visitors can borrow.

During the last several years, he has witnessed multiple whispered marriage proposals in the Audiorama. He has also watched people cry.Twice, he said, people who were contemplating suicide told him that the beauty of the place had persuaded them to rethink their plans. One man, mourning the death of his son, told Sampson that his meditations there had helped him find peace.

Sampson said his writing has improved greatly since he began spending time in the garden. “It just has a certain magic,” he said on a recent chilly morning as he arranged library books on a folding table.

City officials inaugurated the Audiorama in 1972 on a site famous for its mystic properties. On one side of the garden, carved into a hillside, lies a cave known as Cincalco.

Pre-Hispanic groups considered the cave the entrance to the underworld. Huemac, the last ruler of the Toltec culture, is said to have taken his life there around 1100, distraught over his fading empire. 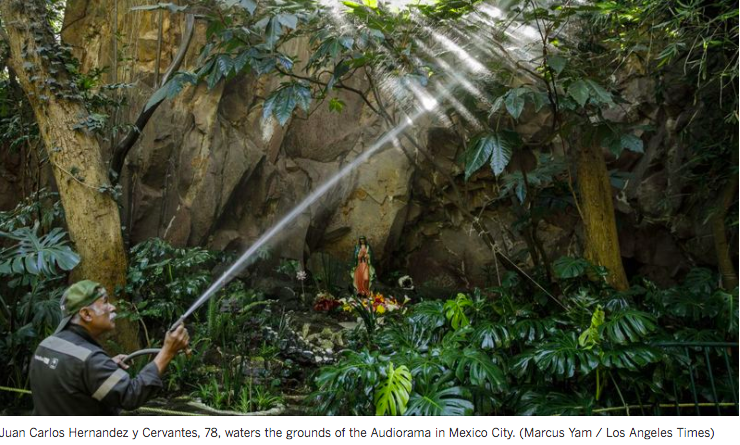 Caretaker Juan Carlos Hernandez y Cervantes, who spends his days in the garden, watering bursts of pink, white and red flowers, leafy trees and rows of bamboo, keeps a candle lit inside the cave at all times.

“It’s so our spirits have light,” he said.

Hernandez has been working in Chapultepec park for more than 30 years and has been taking care of the Audiorama for 10. Stooped from his 78 years, with a bushy white mustache, Hernandez gets asked by some people when he will retire. Hopefully no time soon, he tells them.

“I love this place,” he says. “I’m still working because I like my job.”

Beyond tending to the impressive garden, he helps care for the family of cats that roam the property and is in charge of changing the CDs that play while the space is open, from 9 a.m. to 4 p.m. He maintains a collection of thousands of discs, nearly all of it donated. He follows a schedule, which is posted on a sign.

On Mondays, the park is closed.

Chapultepec, which sprawls over nearly 1,700 acres in the middle of the city, is one of the largest and most visited urban parks in the Western Hemisphere. Known as “the lungs of the city” for the oxygen produced by its densely planted sequoia, cedar and cypress trees, it boasts a zoo, a man-made lake filled with blue paddle boats and towering Chapultepec Castle, whose elaborately appointed rooms were once inhabited by Emperor Maximilian I and his consort, Empress Carlota.

While Chapultepec gets roughly 40,000 visitors a day, the Audiorama typically sees only a few hundred. That is partly because of its location, tucked in a corner of the park near a World War II memorial and a usually dry fountain that features a white marble sculpture of Goliath on one side, and on the other, a sculpture of David with his sling.

On a recent morning, seven people visited the Audiorama in the first hour it was open, according to a tally counter Sampson uses. One of them was Geraldina Rome, a 29-year-old attorney, who for three years has been coming once a week to meditate. 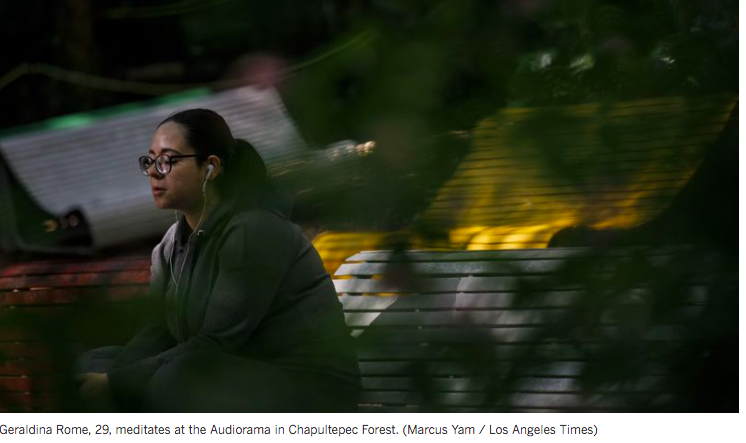 “I call it my magic garden,” she said. “It’s important to disconnect for a minute, and to let your mind go to another place.”

She sat down cross-legged on a sky blue bench, began to breathe deeply and closed her eyes. All traces of the city — the honking, the thick clouds of car exhaust — were gone.

It was just her, the fragrant air, and Franz Schubert’s rousing piano composition — Impromptu No. 3 in G-flat major.