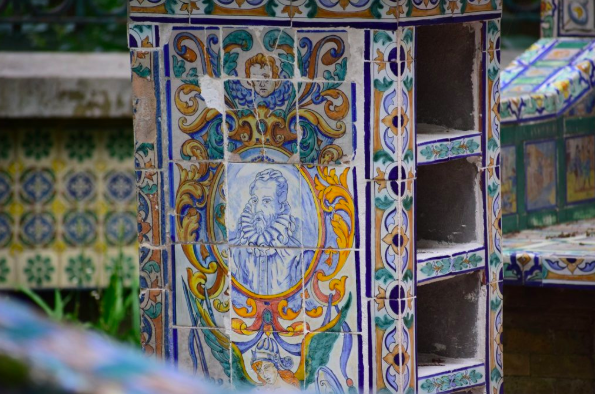 Fall in love with this fountain

In a hidden corner inside the Chapultepec Forest, one of the most beautiful places around here, tens of hand-painted tiles narrate some of the chapters of the monumental literary work of Hispanic literature ‘Don Quijote’ by Miguel de Cervantes Saavedra.

This fountain was built in 1921 with the unique and incredible purpose of inspiring people to read and contemplate surrounded by nature in Mexico City (CDMX). For generations, it has been a kind of tribute to the work of Cervantes and to the imagination of an artist who decided to mix the gentleman from a place “de la Mancha” along with Dali and Rivera.

For its value and meaning, we want to recover it.

In this article, we will share some key facts about why El Quijote is a special masterpiece (based on the context in which it was done, to the features that makes it unique):

It is the second most read book in Spanish after the Bible. It is also the most translated novel into other languages, 50 in total.

The first edition included about 1.500 copies, but today, there have been sold more than 400 million copies around the world.

It is believed that part of the book ‘Don Quijote de la Mancha’ was written from jail because Miguel de Cervantes was in prison serving a sentence for mistakes made in his job as a tax collector, right at the time when it was written.

There is a digital version in high resolution of one of the copies of the first edition of ‘El Quijote’. It is part of the digital collection open to the public from the National Library in Spain and everyone can access its 1.282 pages.

The book starts with the following sentence: “In a place ‘de la Mancha’ which name I do not want to remember …” according with a study from the Complutense University in Madrid, the place is ‘Villanueva de Los Infantes’, a town of Ciudad Real, capital of Campo de Montiel and not Argamasilla de Alba, as it used to be believed since the 18th century.

Don Quijote is a very critical book because it makes fun of the knightly tradition and polite forms, something unprecedented in his time and exposed many taboos.

This masterpiece has up to 381 thousand words, and 23 thousand of them are different and without repetition.
Around 1615 the second part of ‘El ingenioso caballero Don Quijote de la Mancha’ was published.

It represents the first modern novel exerting an enormous influence on the entire European narrative
Cervantes did not enjoy the success of his novel since at that time authors earned just a small amount at the moment when their books were printed.

In 2002, The Nobel Institute did a survey and ‘Don Quijote de la Mancha’ was chosen as the best fiction literary work in history among 200 writers from 54 different nationalities.